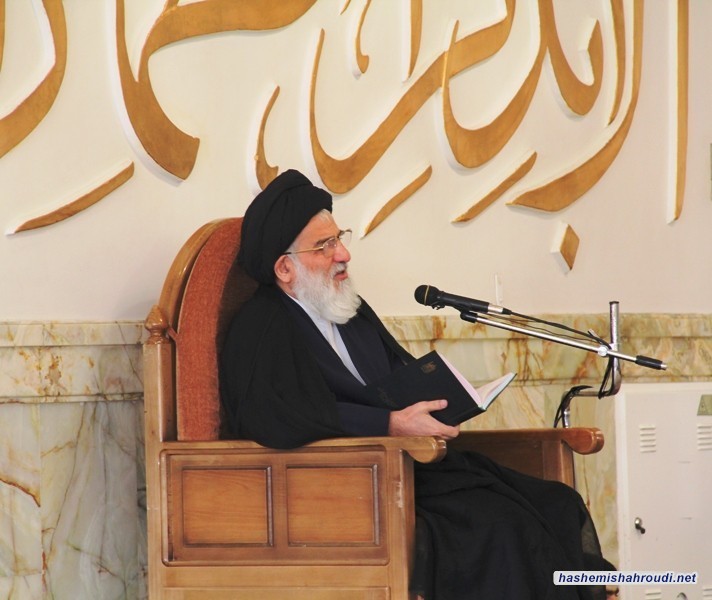 In the name of God

Recourse to the religion of Ahle Bait (as) and the pure Islam have made Iran as a regional superpower.

At thebeginning of teaching his Fiqh-e-Kharej,Grand Ayatollah Hashemi e Shahroudi congratulated the students and the clergymen due to the beginning ofthe new academic year. He talked about some of the tasks and the responsibilities of HowzaElmiyah of Shia and explained the pivotal mission of the clergymen and scholars in the present era.

Mentioning the differences of university and Howza, he said:"unlike the universities, getting knowledge isn’t the only duty of Howza and due to this fact, the holidays haven’t the same meaning and concept as it has for the scientific centersand universities.

Saying that acquiring knowledge isn’t the solely duty of HowzaElmiyah and also acquiring knowledge doesn’t only restrict to learning Fiqh and Osul and even that Fiqh and Osul cannot besummed up within the formal Fiqh and Osul, he talked about the necessity of HowzaElmiyah's entering into the new and modern discussions which are common nowadays and added: "Although the HowzaElmiyah of Qom is the biggest HowzaElmiyah within the world of Shiite and had a lot of honors and dignities, according to the heavy responsibility of Howza in the present age, still we have huge distance to arriving to the desirable point and this distance should be covered by a useful and effective planning which has to be designed according to the needs of current age and the capacities of Howza.

Mentioning the fact that according to the meaning of religion's Fiqh– which has been emphasized in the holy verse of Nafar – the religion's Fiqh is much wider than the common Fiqh, he alluded to the necessity of producing knowledge and creating a system within the various arenas of Human Sciences such aslaw, economicsandpoliticsthat are based on the teachings ofrevelation in order toresponding to the current needs of mankind and added:" the formation of Islamic republic of Iran and the global and regional attention that is paid to it and the complicated needs from the aspect of management of community reveal the necessity of producing more Fiqh and creating a system within the various arenas.

He also regarded answering the doubts and theoretical invasions togenerality of Islam and the religious values and teachings and the jurisprudential issues as one of the important responsibilities of HowzaElmiyah and mentioned the necessity of the contribution of HowzaElmiyah in such arenas and paying attention to it.

In another part of his speech, Grand Ayatollah Hashemi e Shahroudi talked about the obligations and responsibilities of other organizations within the arenas of publicity and policy and public management and – along with appreciating the useful and effective activities of researching and scientificcenters of Howza in Qom – he emphasized the importance and the necessity of paying attention to the main mission of clergymen in the programs of these organizations and institutes and the requirement ofhaving dominanceand masteryfor the managers and planners over the matters that they are responsible for.

Mentioning the necessity of producing knowledge for the Islamic sciences, he stressed on the need of designing a new and live Ejtehad which would be able to answer the minor and major demands of current world on the base of Ejtehad-e-Javaheri and, with respect to the mentioned fact, he regarded the main factor of recognizing the subject according to a correct understanding of the words and the views of experts in the fields of present-day sciences and analyzing them as a helpful matter.

The prominent master of HowzaElmiyah of Qom reminded the sacred movement that the glorious Islamic revolutionof Iran initiated by the leadership of Imam Komeinei within the Islamic and Arabic world and added: "the amazing successes that our Islamic country have achieved under the aegis of resorting to the religion of Ahle Bait (as) and the Islamic revolution have made Iran to be a regional superpower and in the military and politicalequations ofthe worldespeciallythe issue ofSyria, our country is regarded the same as Russia and by using its trans-regional power, Iran has overcome the fateful wish of western countries and America in the matter of attacking on Syria."

He said: in the Arabic world, any group and party which are following Iran has encountered with reception and acceptance and achieved their aim and targets along with making progress in attracting people and broadening their Ahle Bait (as).

Grand Ayatollah Hashemi e Shahroudi alluded to the anti-Shia activities of Egyptian Salafi which were led to the martyrdom of five people who were related to Iran and Hezbollah-e-Lebanon and added: "thisapparent cruelty and obvious viciousness led to the overthrow of a government that made a great effort to remove thesymbols of Shiite from Egypt and shortly after the breakdown of this government, the ideology of Shia and the Shiite writings and books were paid attention and encountered with public acceptance in a way that a particular movement shaped in the publication ofShiitebooks and it went on and on until one of theEgypt'ssecularpersonalities openly said: "from the juridical aspect, I accept the Shiite jurisprudence."

At the end of his speech, Grand Ayatollah Hashemi e Shahroudi mentioned the preciousbloodsthat were poured to boost the revolutionary thought of Shia and the holy Islamic system within the Islamic world – such as Seyed Muhammad Baqir Sadr and Seyed Abbas Musavi, theFormer Secretary Hezbollah, and the Great martyrs of imposed war – and regarded the current honor and dignity of Shia as a result of these sacred bloods and wanted the HowzaElmiyah and other clergymen to defend and protect the blessings of these holy bloods in a correct way.