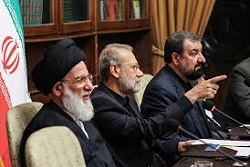 Grand Ayatullah Hashemi Shahrudi, counted all blames of Trump on Sepah Pasdaran of Islamic Republic of Iran as Trump’s anger and world leaders’ arrogance. Statement of Grand Ayatullah Hashemi Shahrodi in the beginning of expediency council’s commission meeting stated that the trump’s non-diplomatic and unequal words are distorting history and the geography of Iran, the trumps all speeches and all words are only blaming others.

Head of the expediency council, counted all this anger of Trum due to the defeat of all American policies in the regions and the grand ayatollah Hashemi Shahrudi said the Daeish sedition is created by America, after all defeats America is trying to destroy the region there is only Iran that doesn’t let it to do it. The grand Ayatullah mentioned, while there was presidential campaign of America, Trum always used to say to the government of the America that you’ve made Daeish, but after all its all clear that how Daeish came into the existence. So these hollows are upside down and can’t stop people to understand the reality.

Grand Ayatullah Hashemi Shahrudi, counted all blames of Trump on Sepah Pasdaran of Islamic Republic of Iran as Trump’s anger and world leaders’ arrogance and he counted Sepah Pasdaran as the main system which is destroying all terrorism in the region. Demanding and request of region countries from Iran to help them is their right to ask, who are politicians they who the best, to try and show issues up and down is fruitless and destroying their own personality. the grand ayatollah stated that there is true and authentic proofs for Persian Gulf in all resources like scientific, Political and geographical resources, it’ll be real type of joke that a president of a country due to encouragement of some regional and arab countries and having financial support, change and show vice versa the reality of history. Head of the expediency council said there is defiantly Zionist lobbies which are the cause of pressure on the president Trum so forgery and change the reality of history and geography and he added exit of these governments from Unisco is the reality of element that the super power subsidiary of tiny and illegitimate state.

The grand Ayatullah Hashemi Shahrodi all anger and wrong stands of the American president counted all repetition of his presidential campaign, still he is trying to pressurizing Iran and is trying to get more benefits from international atomic agreement, its like he doesn’t know that international agreements has got its time to talk and then is time to act on. He insist the that one of the goal of America and some others was to talk on unrelated topics of the agreement, by grace of Allah controls of the supreme leader and the assurance of government officers whole international atomic agreement was only on atomic issues not out of that.

The grand Ayatullah said there is no way of talks on capabilities of military and defense, all official authorities have said for many times that we will not accept to reduce military and defense abilities.  He stated, all these trying give only unbelieving status of America to the world that America do not act on international agreements which will make people go away from the united states. The deputy of the council, opposing the European countries and partner of the agreement 5+1 is only the reason of isolation of American policies. Iran has announced many times that after all bans on Iran, Iran will never talk on defense capabilities of the country because this is the right of Iran’s nation to defend themselves.

He stated that policies of Iran in reaction of American actions are revolutionary policies and according to the national interests. All authorities should follow the states of the Supreme leader and be united all groups and power and bright Iran. He insist on the point “do not leave any excuse on unbalanced and uncompromised American president” added by grace of Allah the nation of Iran is under umbrella of Supreme leader and is well united. He counted Sepah Pasdaran as revolutionary military and loyal to the people of Iran and Islamic system, Sepah Pasdaran always has proved after all defending Iran and Islamic revolution is supporter of oppressors and poors