At the noon of Wednesday 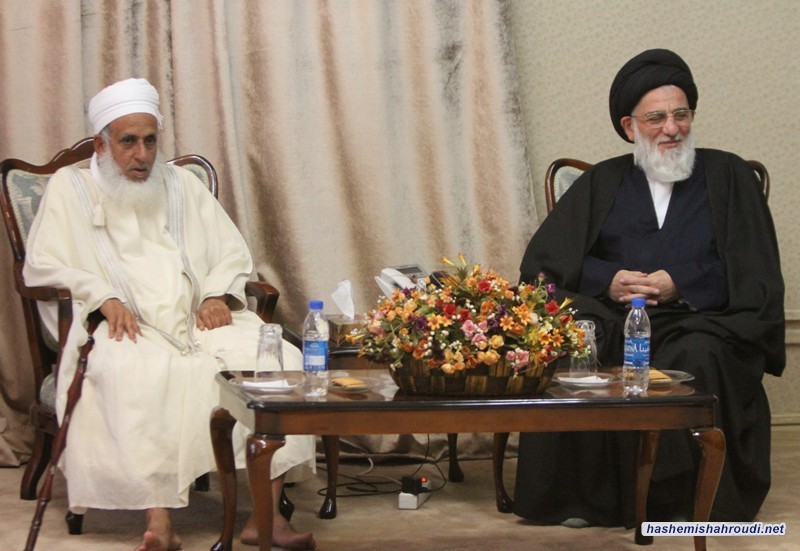 This meeting which was held by the presence of Ayatollah "Mohsen Araki" – the secretary general of international assembly of Islamic religions approximation – and the vice presidents of this assembly, at first some discussions were posed about the scientific and juridical resources with respect to different religions and also legal and juridical system of Islam and his highness Ayatollah Hashemi e Shahrudi explained about the Islamic legal system based on the juridical of Ahle Bait (AS) which are being utilized in the Islamic republic of Iran.

His Excellency Ayatollah Hashemi e Shahrudi said that due to the victory of Islamic republic of Iran, the religion of Islam has been confronted with a big reception into the western countries and added: nowadays, one of the issues which has caused plenty of troubles for the Islamic world is the issue of Takfiri's group that unfortunately has been changed into a movement at the present time and are committing terroristic attacks such as assassinations and explosions by means of deceiving the young in some counties like Iraq, Syria, Somalia and Pakistan and the group of Takfiri are deceiving the young to commit some terroristic activities through giving some false promises to them.

The first vice president of the leadership's Assembly of Experts stressed on the fact that this Takfiri movement is really dangerous and then added:" this movement is destructing the respectability of Islam and the imperialism is advertising and emphasizing this group so that they can achieve their goals.

In this meeting, his Excellency Ayatollah Hashemi e Shahrudistated:" this movement commits some offences on behalf of Islam and has engaged the Islamic world through these kinds of activities so that the Islamic world become unaware of its main affairs such as dealing with the imperialistic front and the issue of Palestine.

Ayatollah Hashemi e Shahrudi by emphasizing the fact that the Ideology of extremism andterrorismandWahhabi and Takfiri is most dangerous issue for the Islamic world and gave some samples of the satanic Fatvas of this deviated sect and added:" in fact, they are serving to atheism and Israel through these kinds of ideology."

His Excellency also said: "the scholars of Islamic world and the scholars of all Islamic religions have to gather and think about a solution to preserve and protect Islam from these uncertainties and ambiguities; they should pay attention to this important issue through their compilations, writings, speeches, essays and different seminars and do their best to notify the Muslims of this satanic sect because the first step of approximation is the matter of dealing with the ideology of Takfiri's group and suggest an alternative for this problem for the reason that it is the most dangerous conspiracy and plot against Islam and all Islamic religions.

In this meeting, Sheikh Ahmad Ibn al-Khalili" – the Mufti of Oman – gave a short summary of the religion of Abadiyah and their condition within the Islamic world and Ayatollah Mohsen Araki explained about the goals of this trip and the meetings which were held and then talked about the necessary steps that are expected to be taken in order toexpanding the communications and creating the approximation among the Islamic religions.